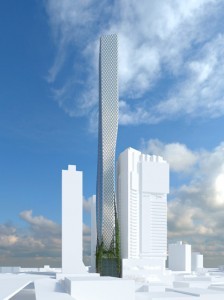 Melbourne City has again attacked a mooted 72-storey residential tower on Southbank, describing it as “oppressive”.

It says Urban Matrix’s 240 metre plans for 54 Clarke Street will cast shadows on public spaces and dominate the view of neighbouring buildings.

”The sense of containment would be substantial and oppressive, particularly for dwellings at the lower levels,” a council report viewed by Fairfax Media says.

The building is being reviewed by the state government after planning control changes nullified a previous approval.

BKK Architects director Simon Knott says the tower will become an icon for those travelling on the West Gate Freeway.

”Because it twists as you move around that bend, the whole building will twist and turn. It’s almost like the building is alive,” he told Fairfax Media.

He says south-facing apartments in the neighbouring building would keep their views, including of the Royal Botanic Gardens.

”The building will sit down one side of the view – it’s anything but oppressive.”

Units in the previously approved designs started from $340,000 for one bedroom and from $400,000 for two bedrooms.

In February Robert Doyle said the building was more than 100 metres taller than preferred by the council.

The 239 square metre site is the former premises of a motor repair firm.