2 years ago•By Andrew Salvo
FORGET everything you thought you knew about the inner city apartment market in Melbourne, as Ray White Southbank & Port Phillip just sold $4.11M worth of property under the hammer to stamp an 87.5 per cent auction clearance and an average time on market of 21 days. Four bidders battled it out to win 3409/350 William Street, Melbourne which sold last night under the hammer for $1.170M.

“All bidders were pre-qualified and everyone we expected to turn up and bid did. We knew ahead of time that we created a really exciting competitive environment. The room was crammed to the point that we struggled to close the front door at auction time,” he said.

“All 35 seats were filled 15 minutes before auction time and there were another 30 or so stood wherever they could. Many behind the reception counter, at the back of the room and in the aisles. Each property that sold passed vendors’ reserve prices through natural competitive bidding. The one that passed in had two bidders and unfortunately the highest bidder did not meet the vendor’s asking price on the night and negotiations continue. Most people stayed for the whole show which was fun and entertaining for all. Bidders were rewarded for bidding with bottles of wine and gifts. The night was a hugely successful and an entertaining success.

“Our agents have been flooded with phone calls from property owners that were previously dubious about putting their property through an in-room auction. They are now enquiring about when we will be running our next in room auction event.” Mr Salvo said the in-room style of selling was something new and innovative for the auction market.” 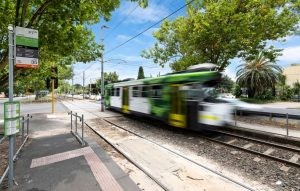 “Owners don’t like the stress and many agents just don’t have the courage let alone enough commitment to commit to the arduous buyer work required to prepare bidders for an auction,” Mr Salvo said.

“With a huge amount of support and encouragement from the Ray White corporate trainers, we as a team decided that it is time to turn this largely private treaty market on its head and offer sellers and buyers something new.”

“It is much harder work and there is a definite skill that we are constantly training and refining.”

“We also believe that buyers and sellers feel more secure due to the transparency of the process.” “Where else can they so conveniently on one night get a true snapshot of the sentiment of the market. For me, that creates confidence for buyers and sellers to make decisions. That’s why it works. Just make sure you choose an agent that is trained to run the process.”

A majority of the attendees were Australian citizens or permanent residents. The inner city is becoming increasingly more multicultural, there was a good mix of nationalities and investors which made up approx 30 per cent of the crowd.

“We even had significant interest from Sydney buyers look to move down to a cheaper market.”