This week, I take a look at inflation and interest rates as well as the world’s new richest man and what that means for property.

High inflation is something that was very uncommon prior to COVID. In fact, before June this year, the inflation rate hadn’t moved above the two to three per cent band set by the RBA in almost a decade when it hit 3.4 per cent in September 2011. In the June quarter, it did hit three per cent but was driven by the end of free childcare and cheap petrol which were both available in the June quarter last year.

Like Australia, the rest of the world is watching their own inflation figures very closely. In the US, the latest inflation figure was announced today, hitting 5.4 per cent for the year to July. While a particularly high figure, it does appear that inflation concerns are abating for now and as hoped, the high rates are only transitory. The first reason is that the month on month rate was particularly low as consumer spending has slowed down. The second is that many surveys of inflation expectations are starting to show a turnaround in opinion. The third is that bond investors no longer appear to be betting on a sustained rise.

With rolling lockdowns ramping up across Australia over the past two months, it is likely that inflation will remain relatively subdued in the September quarter. Locked down people don’t spend much. The rest of the world opening up again should also help with supply chain challenges which have forced up pricing of many imports.

There are a number of risks to the inflation outlook. The first are rental levels, which are ramping up in some cities, particularly Perth and Darwin. At this stage, however, median Australian dwelling rents are down 2.2 per cent, driven by drops in apartment rents in bigger cities like Melbourne and Sydney.

The third is increasing inflation elsewhere around the world. Production cost increases in China for example impact on the cost of our goods.

For now, inflation in Australia is likely to stay under control. This means that there is less pressure on the RBA to increase interest rates which will keep mortgage rates low. It could be that the RBA forecast of no change to interest rates until 2024 could indeed be a reality. 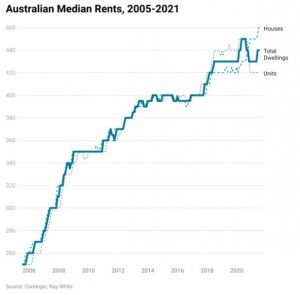 The world has a new richest man. What does it mean to property?

Changes to the way we shop, and particularly the rise of online retailing, has had an enormous impact on retail property during the pandemic. Shopping centre and strip shop owners have had to deal with rising vacancies and rental declines.

But although the headline numbers for retail property generally look pretty negative, COVID hasn’t been all bad for some parts of the market. Supermarkets have done particularly well. Large format centres, historically one of the least desired centre types, have now become one of the top choices, forcing down yields to historic levels. The other top performer has been luxury retail.

Not having much else to spend money on during the pandemic has been a major driver of house prices, particularly for some of our most expensive suburbs. This flight to quality has been driven by high savings rates (not much else to spend money on), as well as cheap and easy finance. In suburbs like Northbridge, Mont Albert, Claremont and St Peters, we have seen prices increase by over $400,000 in 12 months. The biggest price jumps have been in our most expensive and prestigious suburbs.

Like the flight to what could be considered “luxury” suburbs, we have also seen similar demand for luxury goods. So much so that the share price of one of the biggest groups of luxury brands, LVMH Moët Hennessy Louis Vuitton, has hit a record high, allowing the Chairman, Bernard Arnault to take the title of world’s richest person. Jeff Bezos, the main beneficiary from our shift to online shopping, now sits at number two with $US5 billion less wealth than Arnault.

What does this mean for retail property? Strips and centres that contain luxury retailing are doing pretty well in areas which aren’t locked down. And are likely to see a sharp pick up in traffic in places like Sydney and Melbourne where lockdowns continue. IbisWorld estimate that spending on luxury goods will hit $4.5 billion in 2025, growing at an annual rate of 2.4 per cent. Who will be buying these goods? Without Chinese tourists, it is expected to be young people. Millennials and Generation Z are the biggest buyers of luxury goods globally.

Sellers heed the call to auction

Incredible May did not dissapoint